Recently I was deploying a new vRealize Automation (vRA) 7.3.0 environment at a customer and I ran into some problems. In the “vRealize Automation Installation Wizard” the “Prerequisite Checker” stopped working after applying fixes. This caused a major problem because no buttons in the GUI were working. In this article, I’m explaining what might be the cause and how to get around the problem.

The environment consists of the following components: 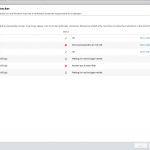 So let’s get back to the problem. The problems started on the “Prerequisite Checker” page in the “vRealize Automation Installation Wizard“. At first, everything worked fine, the “Run” and “Fix” buttons were working, the fixes/corrections were applied on the servers. The problems started when the “Fix” action could not fix all problems. The web page keeps refreshing but the following status stays on the screen “Waiting for hosts to trigger restart“. After a couple of hours and lots of coffee, the wizard was still no step further. 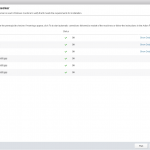 The only way to get things working again without a lot of hassle is to hard refresh the webpage. After hard refreshing the page you need to log in again with the root account. After a couple of seconds the “vRealize Automation Installation Wizard” will automatically appear on a clean “Prerequisite Checker” screen. At this point, you can press all interface buttons again.

I have tested this workaround with Mozilla Firefox as the web browser. It could be that other web browsers like Internet Explorer or Google Chrome display another behaviour.

This website uses cookies to improve your experience while you navigate through the website. Out of these, the cookies that are categorized as necessary are stored on your browser as they are essential for the working of basic functionalities of the website. We also use third-party cookies that help us analyze and understand how you use this website. These cookies will be stored in your browser only with your consent. You also have the option to opt-out of these cookies. But opting out of some of these cookies may affect your browsing experience.
Necessary Always Enabled
Necessary cookies are absolutely essential for the website to function properly. This category only includes cookies that ensures basic functionalities and security features of the website. These cookies do not store any personal information.
Non-necessary
Any cookies that may not be particularly necessary for the website to function and is used specifically to collect user personal data via analytics, ads, other embedded contents are termed as non-necessary cookies. It is mandatory to procure user consent prior to running these cookies on your website.
SAVE & ACCEPT